REST. Kick back. Maybe throw in an easy race or two, work in some easy training miles, and look ahead to 2018.

That was my plan for the remainder of 2017. I was looking forward to spending some time with friends out on the roads and trails and kicking around some ideas for next year's schedule. Running another long race this year wasn't in the plan, much less running another 100 miler. I had all but shut it down for the year - yet for some reason, the idea of one last hurrah for 2017 sounded strangely appealing.


And so there I was, bottle in hand, on a crisp, clear morning at Brazos Bend State Park just outside Houston as Rob Goyen, the Race Director, gave the countdown to "Go". I'd spend the next 18-plus hours winding my way around ponds and over prairies, all the while keeping a wary eye out for the park's famous alligator populations. 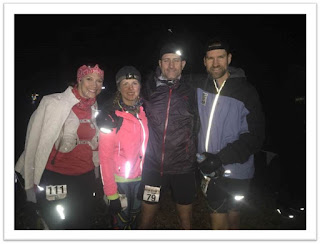 Needless to say, my anxiety level for this race was at an all-time low. A busy schedule at work had consumed most of my mental energy in the days and weeks leading up to the race, and with the exception of a few long runs around town, my training was far from perfect. I signed up very late for this race and hadn't had a chance to so much as read a race report for it. I knew it would be flat but didn't really know much else about the course. I had no drop bags, minimal supplies, and would run only with a handheld water bottle. Fellowship would come via my friend Reece, at whose insistence I signed up for this race in the first place. We hoped to run the race together and see of we could push each other to a decent finish - or have a good time trying.

The Course
This course is pancake flat, run primarily over crushed gravel trails and jeep roads with a smattering of single track. It's anything but technical and involves repeating a 16.8 mile loop 6 times (for the 100). There's one "hill" in each loop that falls right before the first aid station, and I found myself wondering if the organizers threw it in just for some comic relief.


By the way, I use the term "loop" here very loosely. The course actually looks like this:

We did this "loop" 6 times. As you can see, there are a number of small lollipop loops and out-and-backs that make up each segment. It was fairly well marked with the exception of one turnaround that many of us missed in the dark on loop 1 (about 1 1/2 miles out from the start). We caught our mistake on future loops and didn't have any more problems. Fortunately this early oversight only added a mile to our total distance so it wasn't a big deal. After that, each race distance (Half Marathon, Marathon, 50 mile, and 100 mile) was color-coded and easy to recognize on the posted signs. 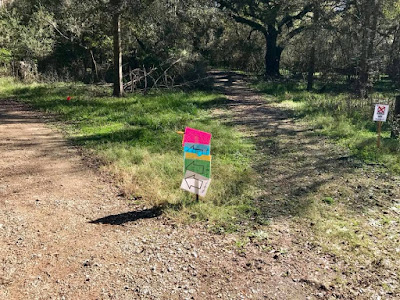 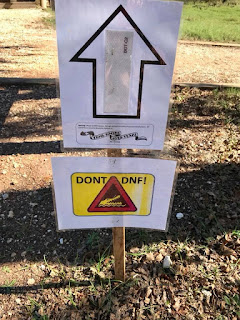 So to summarize: not technical. Pancake flat. Several loops (kind of). Footing is not a problem. The trail was in excellent condition, and given that much of it is crushed gravel, I would think that even in rainy conditions it should hold up pretty well. The aid stations are frequent and well-stocked with standard aid station fare, falling roughly every 4 miles or so along the course. They serve as easy mental markers along the way. As an aside, one thing I would suggest for those who listen to music on the trail (as I will on occasion): cell service was very spotty. I suggest downloading your music and not relying on streaming services. There were a number of dead spots out there, and service even at the start/finish line was sketchy at best. 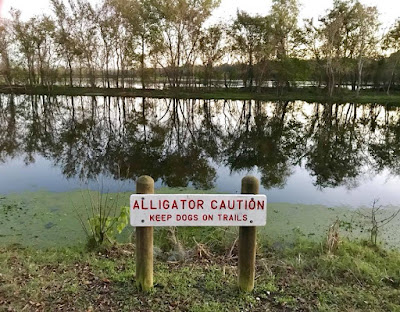 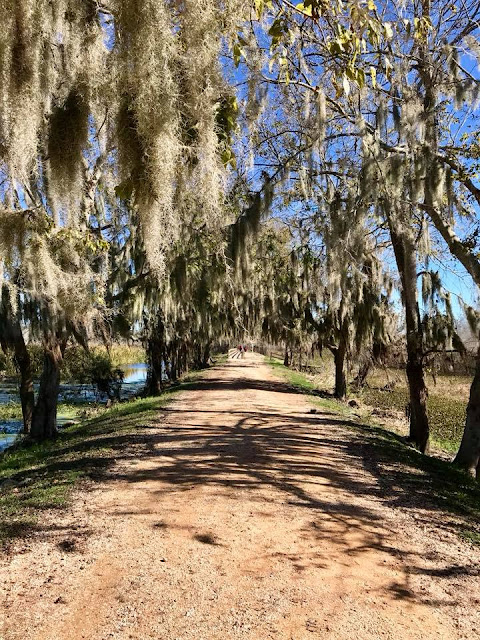 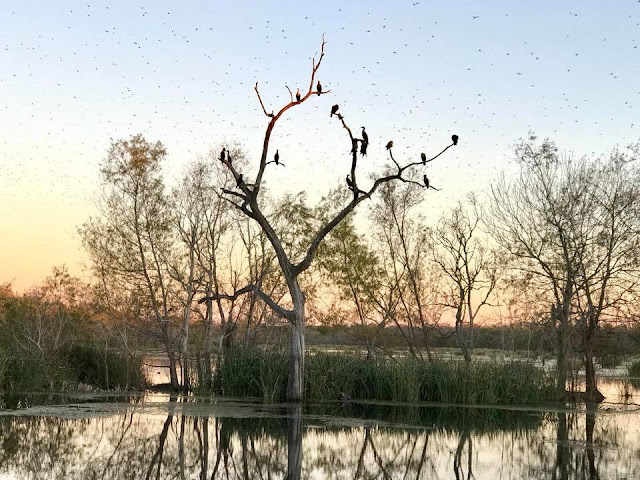 My Day
My first couple of loops were at a very easy, conversational pace. This was by design: I ran with my friend Reece, and our intention was to reduce the wear on our legs by running conservatively early on, thereby saving our strength for a strong finish. The upside to this strategy was that it allowed plenty of time for conversation and kept our stress levels at a minimum. Most of our first loop was run in the cold darkness of the early morning, but as the sun rose, the temperature gradually began to warm up. We were able to shed a few layers while continuing to move along comfortably. The day was off to a very good start: we both felt good, the weather was ideal, and the trail conditions were perfect.

Our second loop was likewise smooth and easy. We minimized our time in aid stations and kept our pace steady. My only disappointment was that, for a park themed around alligators, I saw surprisingly few alligators. (I chalked it up to the cooler weather.) I saw a grand total of one all day. Feeling relatively assured that we were not in imminent danger of a gator encounter, Reece and I pressed on, finishing our first 2 loops in around 6 hours - right on schedule.

For much of the middle of the day, we had joined up with a couple of other runners, Matt and Christene, to share a lot of miles and a lot of laughs. It's amazing how quickly the time passes when one isn't thinking about passing the time. The four of us were on cruise control. We continued to run well together as the rising sun burned away some of the morning mist and moved higher in the sky. We traded war stories, jokes, barbs, and generally had about as good a time out there as it's possible to have while running mind-numbing loops on a flat trail. It was a blast, and (aside from finishing) was my favorite part of the race. Seriously.

While on loop 3, I felt a little surge of energy and thought I might stretch it out a little bit just to see how much I still had in the tank. I was not happy about breaking up the band, considering how well things were going up to that point, but I fully expected to crash later, and I felt that if I didn't try to put a few miles in the bank, I might find myself in a hole when that inevitable crash came. I slowly began to pick up the pace and was surprised at how well my legs responded. My pace increased, and pretty soon I was running around 9 min/mile very comfortably. The weather was still very cool and so far my stomach was holding up - which I considered a miracle in and of itself. I had the chance to see and check in with Reece, Matt, and Christene at several other points throughout the day, which further helped to keep my spirits up.*

The remainder of my race continued to go very well. I simply focused on moving as quickly as I could from aid station to aid station. I was now rolling with some music to keep my mind occupied. I kept my diet simple - coke, ginger ale, potato chips, a little ramen, and water. Other than occasionally feeling some fatigue, I didn't have any "dark places" in this race. I picked up energy from the many friends I saw on the trail and from the enthusiastic support of the volunteers.

The energy crash that I nervously awaited never came. My stomach remained solid, and my legs (despite the obvious fatigue) kept me moving forward quickly enough that even when the darkness descended again and the cold chill of night returned, I didn't need more than a light jacket to stay warm. The miles ticked off quickly and before long I was counting down the last few aid stations before my day would be done. I had my music going, my heart pumping, and I could smell the finish line.

But my race wasn't finished yet. As I ran past the final aid station, I passed a young man who also seemed to be moving very well. He shouted encouragement as I raced by and I offered the same to him. I turned onto the road which marked the home stretch. One mile to go. I was running full out, eager to get this done. Suddenly, I noticed a headlamp bouncing along behind me! "You have got to be kidding me," I thought to myself. Runners are always told to never look back in a race, but I could not resist wondering what the hell was going on back there. Sure enough, the runner I had passed back on the trail was fast approaching! "Oh no, THAT ain't happening," I said out loud, and I kicked it into a gear I didn't know I had. We were running at an all-out sprint now, and he was matching me stride for stride. The red lights of the finish line fast approached, and with about 20 yards to go, HE PASSED ME. (Well done, Matt Collins from Philadelphia. Well done.)

I crossed the finish line in a new personal best time of 18 hours, 52 minutes. Between the photo finish and my new PR, I was absolutely euphoric. I walked over and congratulated my fellow sprinter for an outstanding charge and thanked him for pushing me so hard at the very end. I joyfully received congratulations, a bear hug and a finisher buckle from the race director Rob Goyen. I was also delighted to get a hug from trail mom Becky Spaulding, who proceeded to help me find someplace warm to savor the moment. Before long I was in a tent wrapped in blankets in front of a heater holding a shiny new buckle.


It was a great day. 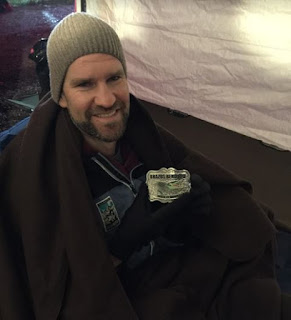 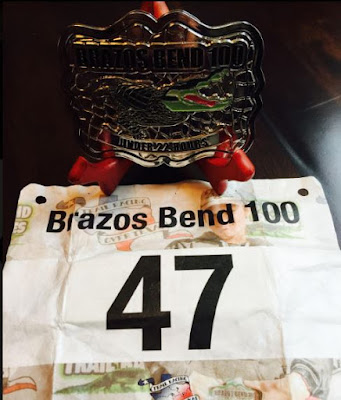 *Matt and Reece also had great days, finishing in 19:35 and 21:28 respectively. Christene was dealing with some injuries but was still tough as nails, running strong for 51 miles before calling it a day.

**I took exactly ZERO pictures on race day. Many thanks to my friend Mike Davis, who allowed me to borrow generously from his extensive collection of pictures from the race.

***Also thanks and congratulations to RD Rob Goyen and the TROT team for putting on an incredible event. The volunteers were all fantastic and helpful, and made the experience that much better for the runners.
Posted by Chris at 12:24 PM

I run in Hokas.